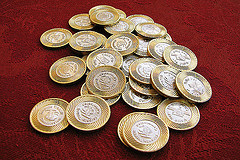 The TTCPass project goals was developed through 2012 to help Torontonians to find transit fare media through the city. Buying a transit pass or token is not the easiest thing in Toronto. The Toronto Transit Commission TTC makes them available through a network of partners (mainly convenience stores and TTC subway stations) to cover most of the city. The two limitations of this affiliation system are:

Torontonians were able to search for product in their neighborhood through the TTCPass website and update product avaibility.

See Christian Muise (the web developer of the project) video presentation for details.

This project was about: